What do you do in an Erasmus+ project?

Last August, the Erasmus+ Ask-Play-Act project ended, here is a summary of all the activities that took place during the project.

Another great project has begun, the aim of which is to encourage young people to get to know each other and also to give them a chance to develop their communication skills and soft skills. The project tries to help with this with the tools of the theater, with topics that are popular and of interest to young people.

We started the first day with an energizer, then Emese held the morning workshop. First, we started with some introducing games where we tried to learn each other’s names. The next activity was a team building session, where the teams had to come up with the best strategy. Then we closed the workshop with a story writing, where in ascending order, from the youngest to the oldest, everyone told us a memory from their childhood, and after we presented the storie with little drawing. The afternoon workshop focused on the rules. We formed two groups where one group wrote loose rules and the other more serious rules. They had to write them and then ask the team members to explain why the rule was important.

We started the second day with a reading of the “gossip”, which we collected in a gossip box, where everyone could write down any event or thought, taking care not to offend anyone with their words. The next workshop was held by Florentina, where we focused on communication, talking about different topics (for example: hobbies, important life events, favourite movies, etc.) The day continued with a workshop with Rares and Alisa, the first activity was a dance energizer. Then came a strategy game where we had to play in teams. Finally, we talked about what bothers us in today’s society.

In the next day with a city tour, where the participants had to complete tasks in teams in Szentendre. Afterwards, we continued the activities along the Danube, where an energizer started. The next part of the day was participated to different theatre activities. We walked in a circle and had to shake hands with each other in different moods. Then, in groups, we had to act out an everyday event in an iprovised way. Finally, each group had to write a story related to their chosen topic.

The fourth day started with an energizer, followed by an activity where we practiced each other’s names.This was followed by a dance activity where a participant had to guess who was going to change dance steps. Then everyone could try their hand at acting, where they had to perform an improvised situation. The afternoon workshop continued with an activity where we had to pass a waterbottle around and everyone imagined it as they wanted. Then the teams had to take 5 standing pictures of a situation. We then reflected on the day together using emotion cards to express our current state.

We started the next day with a massage to get the day off to a better start. Then some chair activity followed. Then the participants had to write a poem and a story, in teams. During the evening, the Spanish team hosted a national evening where we sampled lots of Spanish food and got an insight into Spanish culture.

We started the day with a meditation walk and continued with an energizer. Afterwards, we had a counting activity where it was important to listen to each other. Then the teams started to present their presentations and discuss shortcomings and mistakes.

This project, which we concluded with the act playing. The aim of the event is to communicate and present topics that are of interest to young people and that they can use to develop themselves. To provide an insight into social issues that young people present through small initiatives using theatre. And then everyone found out who their secret friend was during the project. Finally, we reflected together on the project using dixit cards. 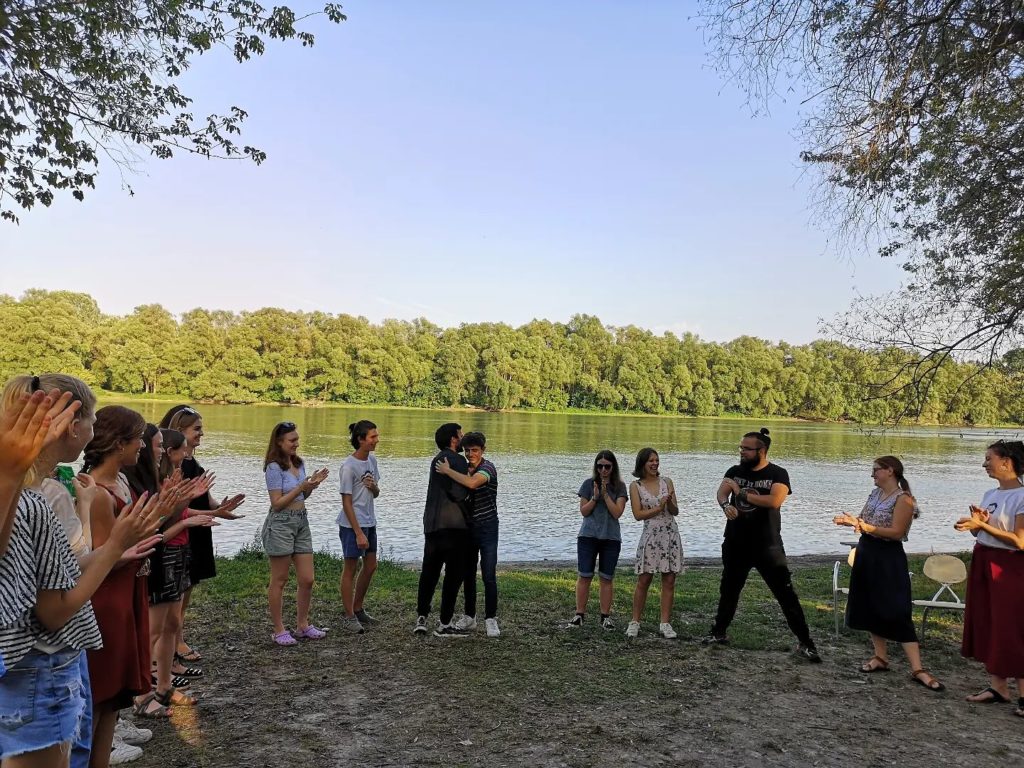