The European Projects Office of the City of Altea (OPE) participated in the Conference on European Cultural Programs organized by the Cultural Europe Program with Citizens and Europe Direct Region of Murcia, held at the Museum of Fine Arts of Murcia last 18th of September 2018 .

The day was oriented to the diffusion of the programs “Creative Europe-Culture” and “Europe for Citizens”. The councilor of Finance and Human Resources, Pere Lloret, and the head of the OPE of Altea, Paloma Verdú, participated in this day, invited by the Ministry of Culture and Sports, and gave talks.

In his speech, the councilor focused on explaining the why and how of the creation of the Office of European Projects and issues related to its fit within a municipal organization. For her part, Paloma Verdú presented the case study ” Europe for Citizens: Yourope: joining paths to build a better perception of Europe ”. The Yourope project, proposed and led by the Municipality of Altea, is part of the “Europe with Citizens” program. Of the more than one hundred proposals submitted and of the 19 accepted by the European Commission, it obtained the second best rating and is the only one of this exercise approved throughout the Spain. Altea heads a European network of municipalities to combat euroscepticism from the youth.

The project has 8 partners from 8 different countries (Italy, Slovenia, Poland, Greece, Cyprus, Belgium, Bulgaria and Spain). And it aims to raise awareness among youth and citizens in general about the role played by the European Union in its day-to-day life, through dialogue, the diagnosis of the current situation and intercultural debate.

The development of the project contemplates a series of eight international participatory meetings in the different partner cities. The initial event, which will bring together all the partners of the network for the first time, will take place in Altea on October 29 and 30. The series will close with a final event in Brussels, in which representatives of the European institutions will participate.

Regarding the meeting in Murcia, Pere Lloret valued positively the participation in these forums in which the different administrations expose their experiences in relation to European projects. “This information exchange creates very positive synergies among all the participants in the day. For our part, we contribute our experience from the local level in the diffusion of the principles, the objectives and the opportunities of progression that the European Union offers us. And in turn, the feedback we receive results in the growth and improvement of the work that is carried out from the Office of European Projects of the City of Altea “. 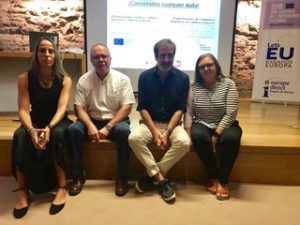 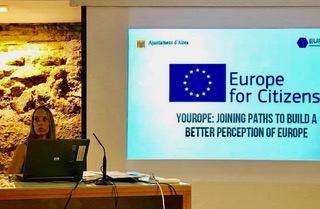